Are you capable of change as fast as the world is changing?

What case do you make for the difference you make in your role?

Are you regularly able to reinvent yourself? 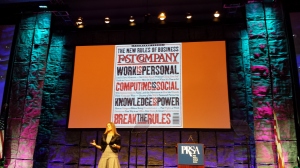 Those were daunting questions asked by Polly LaBarre, a founding member of Fast Company and the editorial director of MIX.

Her advice is not to be afraid, but rather to develop a sense of energy.

She quoted Ralph Waldo Emerson: “There are always two parties, the part of the Past and the party of the Future; the Establishment and the Movement.”

She offered the following advice during the October PRSA International Conference:

Stand for something. The values you stand for will imbue your organization. Your job is to be alive and awake to the shifts, but you also need to know what shouldn’t change. Articulate and advocate for a better future.

“You have to make a case for why what you do really matters,” she said. “Have you developed a story so powerful that people will stand in line for it? That they will tell it for you?”

If they are telling it for you, they most likely are on social media.

Cultivate your innovation DNA. LaBarre posed the question: “How do you do art as a team sport?” She discussed Pixar Animation Studios, which she said “turned the workplace into a canvas.” For example, the visitor badge reads, “A stranger from the outside.” Emergency exit signs at Pixar read, “Exit the building before tweeting about it.”

Lead without authority. The ruling idealogy for so long was “control” but that doesn’t unleash passion and inspiration.

Have you developed your sense of energy?