For the past year I’ve been working with a coach at work. It’s impacted my professional life as well as my personal life.

When I mention this to colleagues and acquaintances, most say, “I want a coach.” Some say it would be great to have someone telling them how to solve work problems. But that’s not what happens.

Being coached is hard work. The person who has the answers is me, and my coach works hard to get me to think about the problem and possible solutions. After a year, I’m almost at the point where I can identify the issue and almost have it identified or resolved before we begin a coaching session.

Jack Zenger and Kathleen Stinnett describe coaching in an article this way:  “The best business coaches  act as a valuable mirror for their direct reports and help them to better assess what they are doing and how they are doing it.” The statement comes from their article, “Coaching as a Management Style: An excerpt from The Extraordinary Coach: How the Best Leaders Help Others Grow.”

Coaching helps me with the complexities of today’s changing environment. For example, I started out learning that directing a team is the way to go. Today, however, the emphasis is on collaboration and negotiation. Before coaching, I established the agenda of team meetings. Now, I ask team members what should be on the agenda. My role is as a facilitator. Everyone is able to bring issues to the group and seek input from all. That doesn’t mean that we are all in agreement. The phrase we use is that we reach an approach or solution through collaboration, but we aren’t striving for consensus.

One of the best aspects of coaching for me is that it provides me with an opportunity to step back, reflect and reprioritize. Otherwise, sometimes I don’t think I would do this, and yet I need to. When I do it, I may realize I’m off course, and need to recalibrate.

I realize that not everyone has the opportunity to be coached. But we can all benefit from taking time to step back, reflect and reprioritize.

Have you seen QR codes in magazines and newspapers or on signs, buses or business cards? Do you know what to do with them?

They are one of the most popular types of two-dimensional barcodes. QR is the abbreviation for Quick Response, as the creator intended the code to allow its contents to be decoded at high speed.

Users with a camera phone equipped with the correct reader application can scan the image of the QR code to display text, contact information, connect to a wireless network or open a web page in the phone’s browser.

All of the newest generation smartphones come preloaded with QR code reading software, including the iPhone and Android. A free app or software can be downloaded quickly and easily to enable QR code reading in slightly older smartphones.

During the last six months of 2010, QR code scanning increased 1,200 percent across North America, according to a report from mobile payments and marketing company Mobio Identity Systems. 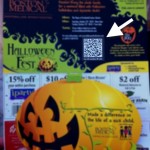 See the QR code in his poster? It takes people to a page that gives more information than a poster could hope to. A person would just use a QR reader on their phone and the link would open in their phone’s web browser.

By adding a QR code to a marketing campaign the brands are creating interactive media. They can deliver video, Web properties, digital coupons or even sell their products directly through a formerly static media.

QR codes may be added to print advertising, flyers, posters or invites containing:

Have you used a QR code? If so, content did you receive?

Today it has 200 million users and is a broadcast channel for major news events, including the plane in the Hudson River and the tsunami in Japan. It’s become a communications tool during political uprisings.

I confess, I am not a big Twitter user, but it has still impacted me, and for the very reasons that Twitter’s cofound Jack Dorsey said about Twitter in a Money CNN.com interview:

“The big thing I learned from Twitter are these concepts of immediacy, transparency, and approachability,” Dorsey says. “I think Twitter’s done a very good job for the communications industry.”

When I’m communicating I write my headlines and subject lines of emails so that they are concise and that the meaning is clear. I think about what I would say if I had to tweet the article. If I can’t quickly identify the purpose of the piece, it needs to be rewritten.

Twitter may not be for everyone, but its lessons offer solid foundations for effective communications.

Ellen F. Brown was not a Gone with the Wind fan until about three years ago when she interviewed John Wiley Jr. about his collection of GWTW memorabilia. “He regaled me with stories,” she said of Wiley who had been collecting since he was 9.

The more they talked, the more Ellen fell in love with the book. They decided they wanted to tell the story of the creation and marketing of the book. The two quickly found an agent and a publisher and realized that 2011 would be the 75th anniversary of GWTW and so they researched and wrote, Margaret Mitchell’s Gone With the Wind: A Bestseller’s Odyssey from Atlanta to Hollywood.

“It’s been a whirlwind couple of years,” Ellen noted during a book talk. “Fortunately, people saw the value to telling the story.”

GWTW was an overnight international bestseller when published 75 years ago, and one million copies sold in the first six months. The book won the Pulitzer Prize and was nominated for the Nobel Prize.

Ellen shares in the book how fame swept over Margaret Mitchell and her husband. They came to terms with it by deciding not to move or change their phone number. The mail came in shifts to their home because there was so much.

The book also explores how Mitchell balanced her obligations as a woman. “You have so many obligations no matter how famous you are,” Ellen observed. “You are still someone’s daughter, someone’s wife.”

Mitchell was the first American author that Europeans embraced since Mark Twain. Because of that, Ellen said, Mitchell had to fight to protect the rights to her book. “Thanks to Margaret, copyright protection is worldwide.”

Although the book was an overnight success, it took Mitchell 10 years of work. “You can’t just dash off a bestseller,” Ellen said. “[Margaret] preached that writing was hard work and requires relentless editing.”

Ellen’s book covers so much of the history because she and her co-author had unprecedented access to thousands of Mitchell’s papers. They found answers to questions that gone unanswered for decades, including what Rhett Butler’s middle name was.

When Ellen moved on to another topic, the audience clamored to know what the “K” stood for in Rhett’s name. Ellen teased, “If you want the answer, you’ll have to read the book.”

Note: Yes, I bought the book. And no, I’m not telling you the answer.

A good story is not written; it is rewritten. And often, many times.

Mystery writer Donna Andrews said, “I write okay books and I revise them into good books.”

She works her hit list to improve her writing, including:

She notes that most of us overwrite so sometimes she will eliminate 10 percent of her copy. “It does wonders for the tautness of the piece,” she says.

Finally, to catch mistakes, she will write using Comic Sans font on the computer. She then prints her piece using a different font. She says, “You see different things that need to be fixed.”