During the Library of Virginia Literary Awards Oct. 20, guests dined with the nominated authors. Host Adriana Trigiani, a best-selling author beloved by millions of readers around the world for her hilarious and heartwarming novels, asked, “You’re actually eating with writers. How is that working out?”

For most guests, it was a privilege to do so and a great way to celebrate the nominees. Tomorrow is another day for celebrating authors as it is National Author’s Day, which was created by Nellie Verne Burt McPherson, a teacher and avid reader.  She submitted the idea for such a day, and in 1949 the day was recognized by the U.S. Department of Commerce.

After attending the Literary Awards, I’m inspired to celebrate several new authors, including David Wojahn, who won for his collection of poetry, World Tree. In accepting he said of the award, “It looks like the Olympics, but it’s for brain works.”

At the event, I picked up David Huddle’s book Nothing Can Make Me Do This, which won the Emyl Jenkins Sexton Literary Award for Fiction. He grew up listening to his parents read books to him. “The sound of the human reading voice is the presence of love,” he told the audience.

David Baldacci won the People’s Choice Award for Fiction for The Sixth Man. I’m planning to read it on my next flight and asked him if I was going to jump in my seat from the suspense. He chuckled and said, “Don’t be surprised.”

Both David and Adriana are two authors I greatly admire because despite their millions of books sold, they are both approachable and willing to sign books and talk with fans and would-be writers. They are authors to be celebrated.

In celebrating authors by reading their books, we also are achieving another success, according to Jodi Moore, who won the Whitney & Scott Cardozo Award for Children’s Literature. “In order for a book to be happy, it must be read,” Moore said in accepting her award.

Tomorrow, why not make a book and an author happy? 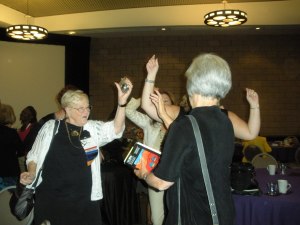 Dancing in the morning was a great way to introduce laughter and play into the day. (Photo by Cynthia Price)

Sometimes I take life a bit too seriously. Don’t we all? So how do we lighten up?

At the recent National Federation of Press Women conference, I learned some great tips thanks to professional speaker Steve Saffron. My day began with a morning yoga class so I already was doing something for me to lighten up and be limber for the day. Little did I know what was to yet to come.

I went to the morning session, and by 9 a.m. I had laughed until I had tears. And I had danced! What a great way to start a day.

Having the good life, is all about having the right attitude. “No one needs a course on human misery,” Steve noted. “You get that for free.”

To survive you have to have laughter and humor, and when you don’t feel like laughing, Steve says to fake it. He asked audience members to giggle for 10 seconds. Most of us hesitated for a second – or two. Then we made a half-hearted attempt. The last five seconds genuine giggles were heard.

To invite more laughter, Steve recommends keeping a collection of one liners, cartoons, puns, stories and photos that can trigger laughter. I love to read the humorous sayings on T-shirts in catalogs. I can’t help but smile when I read, “Don’t Make Me Flip My Witch-Switch.”

And Steve told this one, “What did the baby volcano say to the mother volcano?” Are you ready? “I lava you.”

Yep, you groaned, but I bet a smile started. And if you think about it for even an extra second, you will grin.

Steve also provided practical advice. Most of us have busy calendars. He asked us, “Where are you on the calendar?” It was an eye-opening moment for me. I went through my electronic calendar and noted all my fun engagements and I color-coded them using my favorite color. Now when I see a sea of meetings, I also see my favorite color in the midst and I know that I have something fun to go to. It changes my attitude. Steve recommended yellow for color-coding because it “will help you be mellow.”

As we prepared to leave the session, Steve put on some music to help pep our departure. For a few of us, it was a favorite song, so we stayed and danced. And then others stayed. And then we laughed. We were ready for the day!

We’re working in a prigital age. Did you know that?

Although I was familiar with the concept, I had not heard the word until last weekend’s Virginia Press Women conference. Danny Finnegan, editor of the Richmond Times-Dispatch, spoke about how communications – newspapers in particular – are prigital because they are half print and half digital. It’s all about incorporating digital services into the content offerings to increase the ROI.

At my job we’re hard at work on the annual report, which is definitely prigital. We’ll print a few hundred copies, but otherwise a supporter can check out the interactive annual report on our website. Or they can download the app. Yep, an app for our annual report.

It’s all about information sharing and providing the content in the format that users want to receive it. Plus, with the interactive devices a supporter can make a donation at that moment from whatever device they are using to read the report.

When working in the prigital space, it’s critical to maximize key words and phrases to drive search. This is known as search engine optimization or SEO. It’s one of the reasons you don’t see as many creative headlines because now the headline must include key words.

Website design plays a role, too. If the content is refreshed often, Google will crawl the site more, which could lead to more visitors, who not only read the content, but also download offers and view ads.

While content remains king as it drives users to a site or app, it must do so with the intention of increasing ROI.

Welcome to a new age!

The other night, I went out to dinner with a friend. After we had paid, the waiter provided us with a receipt and the opportunity to get $5 off our next meal by completing a survey about his service. Instead of waiting to get home and go online, we completed the survey in the restaurant on our smart phone.

Americans spend a lot of time on their phones, and marketers want to know who exactly is using them and how.  An important question is where are customers using mobile and where in the lifecycle are they using mobile.

For example, I often use my smart phone in a store to comparison shop by checking a price. If the price is right, I will make the purchase in the store. I’m not alone in doing this. Turns out 16 percent of customers use mobile to compare prices while in a store.

Another way I use mobile is when I’m looking at a catalog while watching TV. When I find an item I want to purchase, I use my phone’s browser to connect and buy.

“When you are able to find out this information you can prioritize your improvements and benchmark your performance,” says Eric Feinberg of ForeSee, who writes for his company’s blog.

As mobile experiences continue to improve, so will the value of smart phones in our lives.

The other day at work I had meetings back-to-back from 8 a.m. to 5 p.m. with no breaks. At noon I had a lunch meeting to make a decision. It was unusual to have that many meetings. Someone asked me if I could have cancelled any or skipped any. The thing was – each one had a purpose.

When meetings have a purpose they have value. When they are efficiently run, they add value. Here are a few tips I’ve adopted throughout the years to make my meetings purposeful:

1. Start meetings on time, schedule the appropriate amount of time and end on time.

2. Pick a meeting space that works. Do you need to project images? Then make sure you have a dark room or one with shades. My team holds a Monday morning agile meeting to kick off the week and share information. It’s scheduled for 15 minutes and is being held in an unused office at the moment. There are no chairs, which is the point. We stand so we can share quickly.

3. Share information in advance. It frustrates me to come to a meeting, only to be handed a document that we’ll review and discuss and then need to make a decision on it. Provide it to me in advance so I can review and pull my thoughts together. It makes decision making much easier and, often, faster.

4. Determine who is accountable. If action items are required, be sure to note who is responsible for the item and by when. Otherwise, the next meeting will be to determine responsibility, which is not a good use of any one’s time.

Meetings have their place if they are used productively.