I am frequently asked for advice about career moves, including opportunities and timing. For the most part, I am happy to provide it. Not only does it feel good to share knowledge, but often the conversations remind me of things I should be doing or considering. Sometimes, though, the individuals asking for advice fail to impress. Here’s how you can up your game –

When seeking advice, come prepared to the meeting. (Photo by Cynthia Price)

Come prepared. Because you asked me for the meeting, I assume you know my background and what you want to ask me. Don’t begin the conversation by asking me to recite my career history or what I think about a particular job. I probably don’t have enough background on you to answer that question. Instead, arrive with a list of prepared – and specific – questions that will help you find the answers you seek.

Be on time. Again, you asked for the meeting. I expect that not only will you be on time, but that you might be a few minutes early and would have secured a table at which our conversation can take place. Most of these meetings I do willingly and freely so I do not want my time wasted as it is a precious resource.

Take notes. I once had a person meet with me and ask me for advice on a sticky situation. I willingly gave it to her. She wasn’t taking notes, but I figured she would leave and write up the highlights of the conversation. Wrong! Two days later she sent me an email asking if I could summarize my advice. (I did not.)

Ask how you can help. I am always impressed when at the end of our conversation, the person asks me how he might help me. I seldom have a specific request, but I almost always ask them to pay it forward. In other words, when someone approaches them for help, I ask that they make the time and help the person if they can. Another thing you can do is subscribe to my blog and tell others about it. You could also follow me on Twitter (@PriceCynthia).

Send a thank you. Yes, you will thank me when we finish our conversation (at least I hope so!) but sending a written thank you is even more appreciated. You could even do a shout out on Facebook or Twitter.

Most of us are more than willing to give of our time and share our experience, but we do expect there to be some commitment on your part.

Aliza Sherman is a speaker, author and web pioneer who has championed women in tech since the 1990s. Newsweek named her one of the “Top People Who Matter Most on the Internet” in 1995. In 2009, Fast Company called her one of the “Most Powerful Women in Technology.”

And while she thrives in the digital age, she recognizes that it also poses some problems.

During the recent NFPW conference she discussed “The Future of Communications in Our Ultra Connected Social Media World.”

Aliza Sherman questions whether 140 characters is enough to be heard. (Photo by Cynthia Price)

“The internet has transformed every way we communicate,” she said. “There are so many layers of complexity.”

Not only do we struggle with consuming all of the information (about 6,000 tweets are tweeted every second), we also have to respond to it (does anyone have an empty inbox?) and determine if the research is accurate.

“As communicators we have to learn to cut through the noise,” Sherman said.

Because we don’t, we are losing our ability to focus. And the noise, she said, stifles our creativity. Some of us obsess over the like button. Some limit their communications to 140 characters (myself included @PriceCynthia).

The result is that we fight FOMO (Fear of Missing Out) and NoMoPhobia (not having a mobile).

Sherman said, “Smarter and more mindful use of technology can transform bad habits into better ones.”

She recommended a few apps to help with attention, focus, productivity and creativity, including:

Sometimes, though, the best app is no app.

“Give yourself permission to disconnect,” Sherman said. “It all comes down to value. Value yourself. Value your loved ones. Value your life. The future of communications is value.”

As a lifelong learner, I appreciate what I learn at conferences. But sometimes the workshops only scratch the surface of a topic. That’s when I like to find books recommended or written by the speakers, who also often recommend great apps.

At the recent NFPW conference I heard about storytelling, branding and social media engagement. In researching the content and speakers, I came upon several books I hope to read (or maybe skim) when I return. Here’s my list:

The Hard Thing about Hard Things: Building a Business When There Are No Easy Answers by Ben Horotwitz. Amazon notes, “A lot of people talk about how great it is to start a business, but only Ben Horowitz is brutally honest about how hard it is to run one.”

Powered by Humanity by Geoff Welch. This downloadable book is a collection of observations about leadership, service, and being human.

Social Media Engagement for Dummies by Aliza Sherman. Amazon notes, “From building trust to sparking conversation to using video and other tools, this creative book is a must read if you want to discover all that goes into the most important aspect of today’s social marketing.”

True Story: How to Combine Story and Action to Transform Your Business by Ty Montague. Amazon notes, “Your authentic brand must be evident in every action the organization undertakes. Today’s most successful businesses are storydoers.”

What books or resources have you discovered through conferences?

Geoff Welch was in trouble. His company, Date-line Digital Printing, was on the brink of falling apart, and he was facing financial ruin. 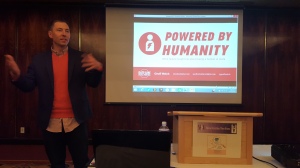 The problem was himself.  “I was being a good soldier,” he told an NFPW audience at its recent conference. “I’m an efficiency guy.”

He’d get the job done and leave, but he wasn’t spending time with his employees and worse, with his customers.

He had taken for granted that his customers were going to keep showing up. “If you don’t nurture relationships, they fall apart,” he said. “You have to take responsibility and invest in the relationship.”

After attending a few conferences, he realized some things. One that was particularly important was that he was acting like a victim and not taking responsibility. Another he learned through his wife, who had taken a class on gratitude.

“I was good at being thankful internally but very bad at expressing it,” Geoff said. He decided to make it a business discipline to send a thank you card every business day of the year. He figured that in doing so he would develop a discipline. To reduce barriers, he had hundreds of envelopes with his return address and stamps at the ready.

“But very quickly I recognized it just felt good,” he said. “It became something that I looked forward to.”

That first year he sent 260 cards. And the real win wasn’t in the cards he sent, but in what came next.

His company designed the cards that he uses. Then the company began offering three thank you notes every three months to people who signed up in Fairbanks, AK. He found that people were really interested in sharing gratitude and thanks. Through Thanks Fairbanks he invited others into a discipline of gratitude.

He started a bog, Powered by Humanity, that became a book. The next thing he knew he was being asked to speak about service and building a life that matters. This led him to opportunities to interview “really cool people,” including Seth Godin and Simon Sinek and giving a TEDx talk.

“You have to get past the fear that your idea doesn’t matter, and that it won’t have impact around you,” Geoff said. “You have a choice about how you are going to matter to people around you.”

Thanks Geoff for sharing your story.