You just never know when you may impact a person’s life.

The other week I wrote a blog about picking a face for work. Soon after it posted, I received an email from a former colleague, Mary-Hope. I had hired her as an intern, and then was able to hire her full-time. Eventually, we both moved on to new positions. We keep in touch, but not as often as either one of us would like. 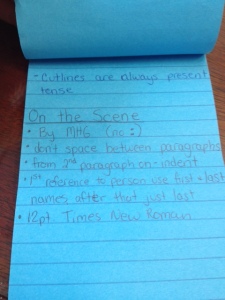 Mary-Hope keeps a list of key things to keep in mind when writing.

She had attached two pictures to the email. They depict editorial notes I had provided on her writing that she says she won’t forget.

“I started a little note pad with some of these reminders to help me write when my brain seems to freeze up!” she said. “…[These] will stay with me as long as I’m writing, or typing!”

I admit: It was one of the most rewarding emails I had received. Part of that was because I’ve been trying to pay it forward, as the saying goes.

I have been blessed with amazing teacher and mentors throughout my life. Both my high school journalism and British literature teachers taught me much about the subjects. They also taught me life lessons. The same holds true for my mentors, who continue to help me navigate my career path.

Because of the guidance of these individuals and their impact on my career, I’ve always strived to help others starting out in their careers. I’ve never been concerned about a payback, but I admit, that email made my day.

How do you pay it forward?

The NFPW conference is just around the corner, and I can’t wait! In addition to the great workshops, the awards and the networking, it’s an opportunity to catch up with friends. I’m always amazed and humbled by the members.

One member, Marlene Cook, is as excited today as she was 40 years ago, to win an award. She recently posted to Facebook, “Holy cow! Just found out I won a first place in the National Federation of Pres Women’s writing contest for a speech I gave at or 60th class reunion. Not bad for the shy kid at Fenger High School who couldn’t speak up in class. Hey, look at me now!!!! Who’d have believed it?”

NFPW is an important part of Marlene Cook’s life.

Those of us who know Marlene would definitely have believed it. That post led me to ask her to share about her career and involvement with NFPW. Of course, before she could do that, she had to do her daily mile walk and finish her deadline for the church newsletter.

Marlene was a “late bloomer” to journalism starting at age 30 working for the Harvey Tribune as a correspondent and “gossip” columnist. She also joined Illinois Woman’s Press Association and NFPW. In high school, her teacher told her she would never amount to anything. Can you believe that?

But Marlene proved her wrong, in part, because of the support and mentoring of press women. She gathered information from her contacts as PTA president, baseball auxiliary mother, Cub Scout leader, church guild president and anything else involving her children. Her column, “The Tattler,” allowed her to tattle on her children, as well as friends and neighbors.

Her career blossomed and along the way, she wrote about celebrities, presidents and the queen of the Netherlands.

One thing, hasn’t changed – “The rush when I’m recognized as a writer.” Marlene continues to enter the NFPW communications contest and when she wins, she says, “It certainly doesn’t hurt my ego and it has always helped secure jobs.”

NFPW, Marlene says, is a feeling. “It’s a feeling of belonging, of support, of concern, of security and of love.”

“I belong to many organizations and have many friends, but my NFPW friends are special,” she adds. “I’ve traveled to all 50 states and 15 countries, most of them through NFPW or related opportunities. I’ve done things I could never have done on my own. The opportunities are endless.”

“I was a shy, scared, high school educated mom, believing I’d never amount to anything. NFPW gave me confidence enough to fool that teacher and myself,” she says. “I went on to hold every office in IWPA except treasurer, (president for two terms), national conference director, POPPS president and historian. I’ve also written an award-wining book. I guess I was somebody after all!”

Don’t just collect business cards. Follow up with the people you have met following the conference. (Photo by Cynthia Price)

Bring Business Cards. A conference is a great opportunity to network. You will want to have business cards to distribute so when you meet someone they will have your name, title and contact details. When I receive someone’s business card, I jot a few notes on the card so I can remember our conversation when I return to my office. Also, if I’ve promised to send or share information I make a note of it so that I can do so. I also send LinkedIn requests so additional networking can occur online.

Review the Schedule. Before the conference begins take some time to review the schedule and speaker bios. Highlight the sessions that you want to attend and make sure that the title aligns with the session description so you aren’t disappointed. Make note of any speakers with whom you would like to have a conversation. I’ve switched sessions after reading a speaker’s bio and realizing they were speaking on a topic that would resonate with me.

Branch Out. When there are meals or networking opportunities, make an effort to sit with individuals with whom you don’t know. Speaking to strangers isn’t always easy, but at a conference you have a good opening for a conversation. Ask why they are attending and what they hope to gain from the conference. Share your reasons for being there.

Build in Down Time. Conferences can be exhausting. Networking is hard work. Sleeping in a strange bed can be a challenge. Keeping up with the office creates challenges. While it’s admirable to want to attend every session and network to all hours, you also need to take care of yourself. Be sure to give yourself some down time if you need it.

Schedule Follow-Up. Following a conference, I’m always reengaged. I have great plans to meet with colleagues and continue the conversations. I schedule the lunches, coffees and phone calls within the first two weeks back; otherwise, I get too caught up in the minutia of my job. If I have follow-up assignments, I try to complete them within a week of returning, if possible.