Today I may become more active on Facebook and Twitter. For the past few weeks, I have not been active on either because I was tired of the political posts and the ads. No place was safe. Several friends posted requests urging other friends to stop sharing their political rants. 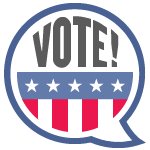 Social media allowed candidates to spread their messages to larger audiences and reach a younger demographic. The platforms also encouraged voters to get out and vote and to “stay in line” during yesterday’s long lines throughout the country.

I had tried to vote in the morning but the wait was an hour, and I had meetings to attend. By mid-afternoon I had received tweets and a text message telling me the line was short. I headed out to vote.

Throughout the evening, I watched the coverage until it was time for my volleyball matches. In between games, I checked the results online.

Thanks to social media – and the campaign issues — this was an election that engaged a nation.