Ellery Adams, who also writes as J.B. Stanley and Lucy Arlington, told a group of mystery writers and readers, that having worked at a bookstore, she was convinced she could write a mystery better than most that were on the shelves. “I was feeling very snobby about it.”

She also was a school teacher for eight years so “you can see why I wanted to kill people,” she said with a friendly laugh. 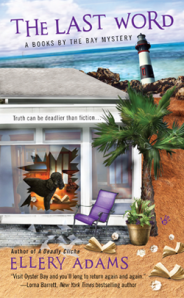 She chose the name Ellery Adams because she loved the works of Ellery Queen and because she wanted to be in the front of the bookshelves.  The name Lucy Arlington originated when she was in Arlington, Va.

The different nom de plumes are helpful, Ellery says. “You can completely fail and come back as a different author. You start with a clean slate.”

She does, however, get confused when she attends writer conferences. “I’m never sure who I am.”

Ellery follows a strict schedule, writing 1,000 words a day. Then she revises those words. She aims for 4,000-4,500 words each week and edits on the weekend. She writes blog posts while she watches TV.

She blogs, even though it takes away from time on her books, because “people getting to know me sells books.” Editors also are requiring authors to blog and post to Facebook and Twitter.

Because she has three separate series, Ellery works in chunks and marks her calendar with the topics of her series: Pies, Agency, Beach.

“I’ve got so many people to kill,” she said, before dashing off to another appointment and then home to write.