Ellen F. Brown was not a Gone with the Wind fan until about three years ago when she interviewed John Wiley Jr. about his collection of GWTW memorabilia. “He regaled me with stories,” she said of Wiley who had been collecting since he was 9. 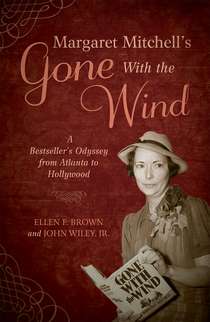 The more they talked, the more Ellen fell in love with the book. They decided they wanted to tell the story of the creation and marketing of the book. The two quickly found an agent and a publisher and realized that 2011 would be the 75th anniversary of GWTW and so they researched and wrote, Margaret Mitchell’s Gone With the Wind: A Bestseller’s Odyssey from Atlanta to Hollywood.

“It’s been a whirlwind couple of years,” Ellen noted during a book talk. “Fortunately, people saw the value to telling the story.”

GWTW was an overnight international bestseller when published 75 years ago, and one million copies sold in the first six months. The book won the Pulitzer Prize and was nominated for the Nobel Prize.

Ellen shares in the book how fame swept over Margaret Mitchell and her husband. They came to terms with it by deciding not to move or change their phone number. The mail came in shifts to their home because there was so much.

The book also explores how Mitchell balanced her obligations as a woman. “You have so many obligations no matter how famous you are,” Ellen observed. “You are still someone’s daughter, someone’s wife.”

Mitchell was the first American author that Europeans embraced since Mark Twain. Because of that, Ellen said, Mitchell had to fight to protect the rights to her book. “Thanks to Margaret, copyright protection is worldwide.”

Although the book was an overnight success, it took Mitchell 10 years of work. “You can’t just dash off a bestseller,” Ellen said. “[Margaret] preached that writing was hard work and requires relentless editing.”

Ellen’s book covers so much of the history because she and her co-author had unprecedented access to thousands of Mitchell’s papers. They found answers to questions that gone unanswered for decades, including what Rhett Butler’s middle name was.

When Ellen moved on to another topic, the audience clamored to know what the “K” stood for in Rhett’s name. Ellen teased, “If you want the answer, you’ll have to read the book.”

Note: Yes, I bought the book. And no, I’m not telling you the answer.