Author Howard Owen does not live an interesting life given that he’s about to publish his 10th book.

He cited a comment by writer Alice Munro, “If you live an interesting life you don’t have time to write.” 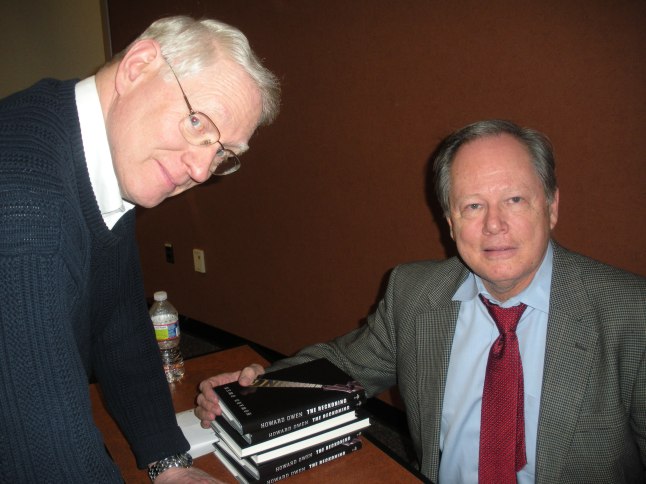 He chuckled as he shared the quote and said he draws the details of his characters from others in real life. “There’s always someone out there I can draw from,” he said during a recent book talk. “There are psychopaths, thwarted lovers, ex-baseball players and guilty baby boomers.”

Although he was 13 when he said he would first be a writer, it wasn’t until he was 40 that Owen published his first book, Littlejohn. He cited laziness, fear and not having lived an interesting life as his excuses.

Writing, he said, takes discipline to do it every day. He also feared failing. “It’s much easier to have a pipe dream,” he said. “But at 40 I realized the worst thing would be to not try at all.”

So Owen began making up characters, settings and finally stories. He found, “You pick things up like a suit picks up lint.”

He doesn’t have a difficult time starting a book, but he said everything takes planning. He’s currently reading and signing his ninth book. His 10th is with his editor, and he’s writing the 11th.

When he’s not writing novels, Owen is business editor at the Freelance-Star in Fredericksburg, Va. He writes a daily blog and quipped, “Every day I floss and blog!”

He confessed that he’s “old school” having more respect for what shows up in print and is still adjusting to social media. “I think I’m the last write in America without a website.”

He acknowledged that he has to be present on social media platforms. “You have to be on Facebook or LinkedIn whether you want to write a book or overthrow a country.”

Ultimately for Owen it comes down to one thing: “All I want to do is write.”