We all know the communications landscape has changed. Reporters no longer only take a notebook and pen to cover a story. Now they tweet or update their Facebook status with breaking news. Some carry a small video camera to record the story to post to YouTube or the media outlet’s website. 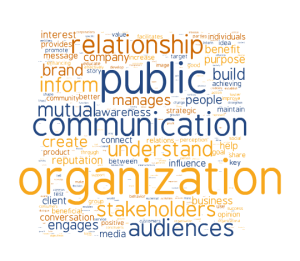 So far the leading words are “public,” “communication,” “organization,” “stakeholders” and “audiences.”

As with most PR efforts, there is a creative name, Public Relations Defined. It’s all part of trying to make sense of the profound changes in public relations since the last time the organization updated its definition – in 1982.

PR was once a one-way process, but today PR moves in many directions and is more about engagement and holding a conversation thanks to social media and the Internet. Today it’s not just about PR or good buzz. It’s about earned media, crowd sourcing, buzz marketing and word-of-mouth marketing.

In the past 10 years, PRSA has convened two special committees to explore modernizing the definition of public relations. The 2003 PRSA Committee to Define Public Relations agreed to a new definition, though it was never formally adopted by the Society.

Submissions will be accepted through Dec. 2 and PRSA expects to announce the new definition in late December.

How do you define PR?