My eyes were wide open following a presentation by Mike McDougall on shaping the future of visual communications.

He shared his thoughts with PRSA Richmond, noting that the mass migration to digital media and the subsequent shift to visually dominant platforms has transformed the communications mix. 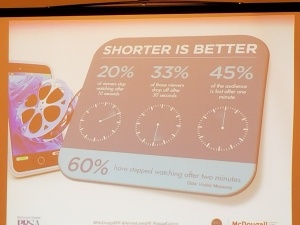 I was overwhelmed by the idea of being able to visually see multiple screens through a contact lens. I confess, the introvert in me wanted to run and hide. But I was intrigued when I discovered I need to consider when my audience is viewing the content I produce and on what type of screen. That knowledge would help me consider the lighting within my videos.

He had us all thinking about visual trends.

For example, we all know that consumption habits are evolving. McDougall noted, “The whole ‘put your phone down’ mentality doesn’t fly.” Because people are consuming information in bits and bytes, he said we need to communicate more frequently. A study showed that by 2015, our attention span had decreased to 8-seconds, which is 1 second shorter than the attention span of a goldfish!

The adage Seeing is believing is true. People tend to believe something they have seen. McDougall shared an example of news outlets reporting canceled flights by British Airways. The airline immediately shared photos on social media of the flight boards showing departure times and people standing in line to board. Those images allowed BA to combat the fake news.

Another trend is the dominance of micro storylines. The right photo, McDougall said, can tell a story in a second. One way to succinctly tell a story is to use infographics. When it comes to video, a Visible Measures report found that 20 percent of viewers stopped watching a video after 10 seconds and 45 percent of the audience is lost after one minute.

As you might suspect, with the focus on visual, it’s all about the eyes, which are becoming input devices. Another consideration is the amount of time spent on devices. McDougall noted that people’s comfort with viewing will change throughout the day. By evening, most people’s eyes are tired.  One suggestion is to use Night Shift, which shifts the temperature of your screen.

2 thoughts on “Seeing the Future of Visual Communications”