Who would have thought biscuits would have anything to do with a career, but they do.

Just ask Francine Bryson, a national pie champion, mom, homemaker and self-proclaimed redneck. Her award-winning desserts have won the hearts of bakers everywhere when she appeared on CBS’s “The American Baking Competition.” 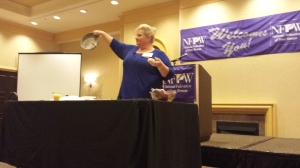 Francine Bryson remains true to herself and excels on the baking circuit. (Photo by Cynthia Price)

I recently heard her speak, and she demonstrated to the audience how to make biscuits. Many of the step involved in making biscuits also relate to creating a successful career.

The first lesson is to follow your passion. For Francine that’s baking. As a 4-year-old she made a lemon meringue pie. “I’m not sayin’ you could eat it,” she told the audience. Over time, though, she developed her skills and now knows that if it “comes out of an oven,” she can make it.

When it comes to ingredients, Francine said she uses self-rising flour.  “This lets you skip baking powder and baking soda,” she said. “Who has time for all the extra ingredients?”

Another way to look at that is to make sure you have the right ingredients. In the case of work, do you have all of the information that you need to create a PR plan or the elements to write a great story?

Once she had the right ingredients, she put a whisk in the flour to lighten it up. “Sometimes you just need to give it attention,” she said.

That’s good advice, especially, if I apply it to a project. For a project to succeed, I need to give it the appropriate attention. 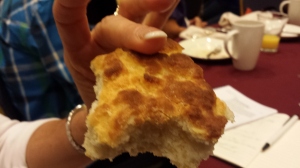 I realized that sometimes when I’m working on a project, I make it too complex. Listening to Francine I realized I should not overwork or overthink a problem.

As she gently mixed the batter, I thought about challenges I have had at work, and how sometimes I overthink them and fret about them instead of simply quickly addressing them. The advice also holds for making friends with colleagues, even those with whom you don’t directly interact on a daily basis. You never know when you might need to mix in additional knowledge.

Her final advice was to take time to play in the kitchen because “it’s cheaper than therapy.” I admit that I enjoy whipping up a storm in the kitchen to unwind. But even if you don’t like to cook, the point is to make sure you have fun in life.

Now that’s a recipe for success.