What do speechwriting and zombies have in common? A lot. At least according to Taylor Clark, a 20-year veteran of the U.S. Navy, who spoke about the rules of survival for speechwriting at a recent speechwriters conference.

He noted that his tips not only help with writing a speech but also work for surviving a zombie apocalypse.

The first rule is about cardio – you have to keep going and going, especially if you’re trying to outrun zombies. If you’re working on a speech, everything must be about the document.  As a speechwriter you should either be researching or writing. That means no checking emails and no watching cat videos on YouTube.

Rule #2 is all about the double tap. You shoot once, that’s fine. You shoot twice and that’s being thorough, which is needed with zombies. With speech writing, it’s all about accuracy. So check and recheck. Today’s speeches live on social media, and they live on the news. The speech must be accurate. 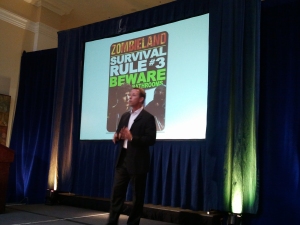 Writing a speech uses the same skills that are needed to survive a zombie attack. (Photo by Cynthia Price)

As a speechwriter you also can’t become too attached, which is rule #5. Becoming too attached is not only frustrating, but it can hurt your confidence. “I’ve worked so hard to dig deep and pull out the right words only to have them lined through and taken away,” Clark said. “You have to separate yourself emotionally from the words.”A final rule was to have a go-to weapon. With zombies it might be a chainsaw, a shotgun or a banjo. For speechwriting, Clark said his go-to choice is Evernote, which lets you take notes, sync files across devices, capture inspiration and share ideas.

“It’s a way to literally put anything in there and never run out,” Clark said. “And you always have the draft with you.”

Clark also discussed what he calls the “Trifecta of Speech Perfecta,” which includes paper, feet and mouth. “It’s like a weird paper, rock, scissors game,” he said.

Since the majority of speeches are on paper, you will have to print the speech repeatedly. For those who don’t like wasting paper and killing trees, Clark suggested giving a donation to the Arbor Foundation. Printing the speech is critical to ensure proper line breaks and spacing. And by printing it, you can stand and practice the speech, which leads to the feet of speech perfecta.

Speechwriters must get up from their desks and stand at a podium and recreate the speech. Clark has a podium in his office and stands at it to edit speeches.

Clark’s final rule focused on being ruthless and pushing past your comfort zone. He urged speechwriters to not just copy and paste from prior speeches. “You don’t want to become a zombie yourself.”

One thought on “How to Survive Writing a Speech (and Zombies)”