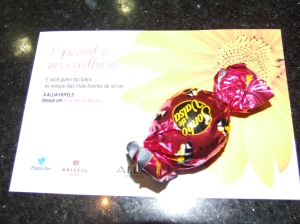 While in Brazil, I was given a piece of chocolate in observance of International Women’s Day.

The day is celebrated worldwide and celebrations range from those of appreciation to those celebrating women’s economic, political and social achievements.

I was in Brazil on Friday and was handed a piece of chocolate by the front desk staff in celebration of the day. Later, I watched as a large group of women marched down a main street in the city of Belo Horizonte proclaiming their rights.

The day before I heard from a woman who spoke passionately about the garden she and the other women tend. That garden is more than a plot of earth with vegetables. The garden is independence. Because of it, the women can feed their families. They sell the extra vegetables and have an income. They use the funds to buy other necessities and to help their children with school.

In the United States, Accenture, which conducted Defining Success research, found that the top three qualities women want in a job are work-life balance, positive workplace relationships and job stability.

The women in Brazil want the same thing. International Women’s Day is a good day to remind everyone worldwide to celebrate the achievements of women.