When I travel, I tend to catch up on my reading. I’ve been traveling a lot lately and have read dozens of articles about leadership. Several ideas have appeared as themes throughout the readings. I thought I would share them with you so you don’t have to read all of the articles. I hope you find them useful. 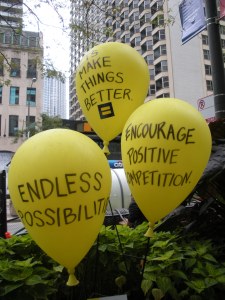 Negativity will wipe out creativity. Too often I’ve been to brainstorming sessions where participants begin to shoot down ideas. The key is to put all the ideas out first. Eventually, you will have to winnow the list. But don’t do it too soon, because sometimes, others will build from an existing idea. And if someone already has poked holes into it, the other person may scratch their idea before sharing it.

Employees are people. Sometimes we forget that the individuals with whom we work or lead are people. We often think of them as employees or workers. When I taught media relations to law enforcement officers, it’s a lesson I repeated about reporters. I reminded the officers, who often did not think highly of the media, that reporters are human beings with families and fears and dreams. And by putting it in those terms, the officers often chose to cut the reporters some slack. By the way, I did the same with reporters.

Relationships matter. When I first joined the organization for which I currently work, I didn’t spend much time getting to know people because I was already buried in work. But then I realized, that if my team was going to succeed, I needed to know more about the people I worked with and they needed to more about me. I spend a few minutes throughout each day talking with team members. Sometimes the conversations are personal, sometimes they’re about work, but they’re always about the relationship we have.

Aim for collaboration. When you are launching a new product or designing a publication, it’s good to ask for feedback and to collaborate with others. What won’t work, though, is aiming for consensus. When I start any project, I explain that I hope the process will be collaborative. I encourage feedback – positive and negative. At the end of the day, though, a decision will be made and it may not please everyone. But everyone will at least have had an opportunity to have been heard.

Take a stand. One of my CEOs once told his top commanders that he didn’t care if they made the wrong decision, but he wanted them to make a decision. That really resonated with me because too often I’ve been in meetings where no one takes a position. Everyone is posturing, hoping they will align with the boss. Or they’re afraid to speak their mind. But it’s important to share what you think and to be clear about it.