Curiosity may have killed the cat, but for journalists it’s their lifeblood.

For those being interviewed by a journalist, it may seem like the curiosity, aka questions, never ends. Now put that person on a bus filled with journalists and imagine the learning that takes place. That’s exactly what happened throughout Labor Day weekend as a group of NFPW members toured Nebraska learning about the state’s agriculture, historical sites and other curiosities. 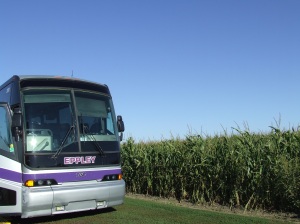 The NFPW tour bus pulls up into a corn field so members can learn more about Nebraska agriculture.

Did you know that farmers plant sunflowers around their fields to protect the corn from the wind?

Did you know that the Sandhill crane has a 20-year life span and mates for life (although it’s been known to stray a time or two)?

Did you know that Nebraska is faring fairly well off in these difficult economic times because there is a worldwide shortage of grain so it’s a boom time for Nebraska farmers?

Did you know that when the pioneers came west there were no trees on the prairies and that every tree seen today was planted?

Did you know that a farmer often carries a golf club? He uses it to help with irrigation by opening the gates on the irrigation pipes so he doesn’t have to keep bending over.

Although the NFPW conference is a great time for professional learning, some of the best knowledge is gained during the pre-tours and post-tours. Why? Because the people organizing the tours are from the state and know the best sources to go to.

So when we learned about the Pawnee and the efforts to bring back their native corn, we heard directly from Ronnie O’Brien, director of cultural education for the Great Platte River Road Archway.

And when we learned about the crops of Nebraska and irrigation, we heard directly from Don and Barb Batie of Lexington, NE, who not only shared their knowledge, but allowed a bunch of press women to climb around on their combines and tractors and offered them coffee in the cornfields.

Then there was Sallie and Al Atkins, who operate a ranch near Halsey, who not only gave us the scoop on cattle, but also served a delicious supper of Angus steaks and berry and peach cobblers prepared by Rustic Tavern. 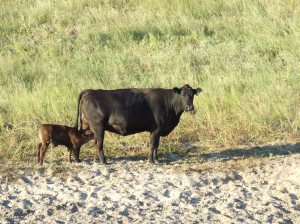 The farm that NFPW members toured has about 600 mother cows.

Along the journey I learned about Willa Cather and how she came to appreciate the beauty of the prairie. I learned about a canteen that served six million troops during World War II. And I discovered the reasons behind the opulence of the capitol in Lincoln.

Artwork in the Lincoln capitol captures the story of Nebraskans, including this piece, which focuses on labors of the heart.

If you missed this year’s tour, it’s not too early to start thinking about next year’s conference, which will be in Arizona.

Who knows what adventure we’ll embark on, but the other good thing about journalists is they seem to have many lives!